MAGNA, a leading global media investment and intelligence company, just released their expectations for advertising revenue for the rest of 2022 and initial 2023 projections.

The first half of 2022 recap:
Based on the analysis of media owners’ financial reports, MAGNA estimates that total net advertising sales grew by +11% year-over-year in the first half of 2022 to reach $151 billion. Ad sales grew by +14% year-over-year in the first quarter and by +7% in the second quarter (+4% above the first quarter).
OOH was the fastest-growing ad format (+30% year-over-year). OOH media is driven by the recovery of consumer mobility since January and the return of national and local advertisers following the deep COVID decline in 2020. Cinema advertising grew by +430% in the first half, as both blockbusters and moviegoers finally returned en masse to theaters.

On the other hand, social media ad sales continued to slow down dramatically, from +38% in 2021 to +7.5% in the first quarter and -1% in the second quarter, to end the first half up by just +3% to $30 billion. Social media apps continue to suffer from reduced access to user data in the iOS environment, which impacts the attractiveness and pricing power of social ad formats, while total social media usage has reached maturity.

Meanwhile, traditional linear ad sales slowed down in the first half. National television sales increased +2% to $20bn, partly thanks to incremental ad sales around Beijing Winter Olympics. Local TV sales rose +10% to $9bn in the first half, thanks to political spending, or +2% on an underlying basis.

The second half of 2022 expectations:
Economic uncertainty and rising inflation are affecting several industries and driving brands and local businesses to moderate their marketing expenses in the second half. CPG verticals (food, drinks, personal care, and household goods) are especially at risk as they are forced to increase product prices and face the possibility of consumers trading down in favor of cheaper brands. Restaurants and retail face a similar business challenge while some industries, like mortgage lenders, see their businesses suffer from the rise of interest rates.

As a result, MAGNA anticipates that non-cyclical ad spending will slow down to +6.6% in the second half. This will be offset by the record influx of cyclical ad spending around the mid-term elections and the soccer World Cup in November. Based on unprecedently large fund-raising year-to-date, MAGNA expects political advertising spending to grow by +63% over the previous mid-term cycle (2018) and generate $7.3 billion in incremental advertising revenue for media owners, with 70% of it concentrated in the second half. Local television will attract almost two-thirds of that total, as political ad sales will account for 25% of total local TV ad revenue this year (and more for stations in “battleground” markets). Digital media formats will receive $1.3 billion from political campaigns, with sales up between +150% and +200% for search, digital video, and social formats.

With a strong first half and political advertising mitigating the slowdown in the second half, MAGNA expects full-year, all-media advertising revenues to surpass the $300bn mark for the first time and reach $323bn this year. That represents an increase of $29 billion over 2021 (+9.8%), with non-cyclical underlying growth at +8.1%. 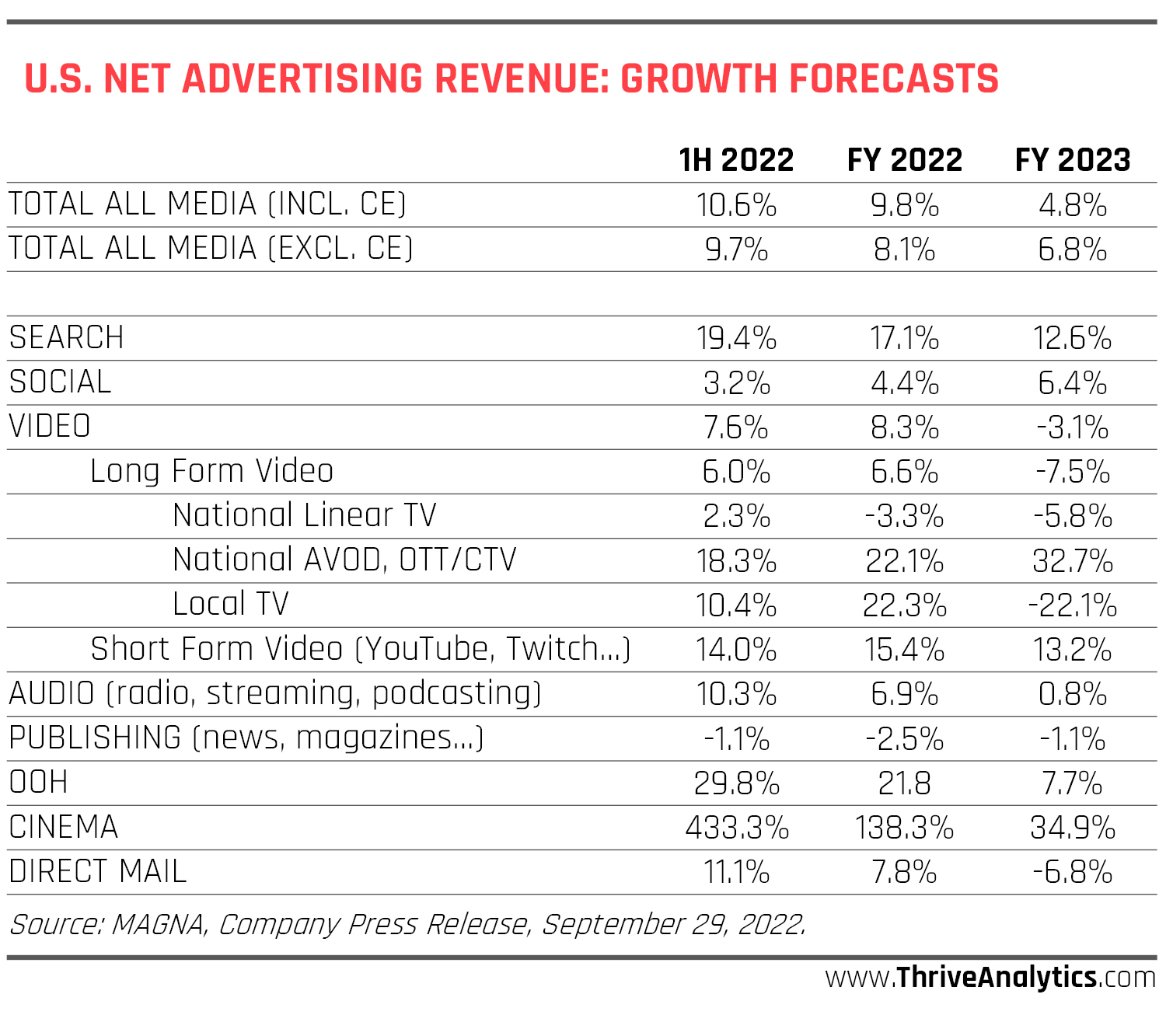 2023 advertising expectations:
The lack of major cyclical events and the weakness of the economic outlook has led MAGNA to reduce its advertising forecast for 2023.
Regarding industry spending, MAGNA anticipates below-average growth for CPG verticals, Finance, and Retail. On the other hand, Entertainment ad spending will grow from the continued recovery of moviegoing and re-ignited competition in the AVOD/SVOD industry. Travel will continue to recover, and Online Betting will develop further as more large states (Ohio for sure, possibly Texas, California, and Florida) may legalize the activity at some point during the year. Finally, there’s hope that the Automotive vertical may recover in 2023 after two years of declining car sales and advertising activity. Car sales have stabilized since August, primarily due to a comparison effect (they had started to fall a year before), and as soon as the supply-chain conditions and production capacities improve, manufacturers and car dealers will compete again to meet the pent-up demand.

Nevertheless, MAGNA still expects total ad revenue to grow in 2023 (+4.8% vs. +5.8% in our prior forecast) thanks to organic drivers, many of them derived from innovation in media offering and media technology. Among these:

The rise of retail media networks. Retail media advertising will increase from $31 billion this year to $42 billion in 2023. The bulk of it comes from Amazon’s product search, but all other large retailers are now developing advertising sales through keyword search or display ads on their apps and websites. Retail media is mostly fueled by consumer brands reallocating below-the-line, trade-marketing budgets from in-store towards digital retail networks, as a more significant percentage of retail sales comes from e-commerce. Furthermore, retail-owned media networks are mostly immune from the privacy-based limitations on data usage and targeting, that display or social media owner’s face, because they can leverage their own first-party data.

The expansion of AVOD. The transition from linear to on-demand, CTV-based television has been going on for 10 years, and it has been mostly SVOD-centric until now. The imminent launch of cheaper, ad-supported tiers from both Netflix and Disney+ will expand the reach and ad inventory offered by AVOD. While the two new offerings may take ad budgets from other media properties (AVOD or linear TV) MAGNA believes these new offerings will “grow the pie” rather than cannibalize existing budgets or incumbent vendors like Hulu, Peacock, Paramount+ and “FAST” channels, which will continue to grow. As a result, the long-form AVOD/CTV segment will accelerate from +22% in 2022 to +33% in 2023, to reach $6.3 billion in total advertising sales.

MAGNA expects to release its next forecast in December 2022.