One in Four Adults Use a Fitness Tracker or Smartwatch Regularly

According to our recent survey data, as 2022 begins, roughly one-in-four U.S. adults (26%) say they regularly use a fitness tracker or smartwatch.

Who uses the devices?

Twenty-six of adults say they use fitness trackers or smartwatches. As is often the case with many other forms of digital technology, there are differences in usage among these devices depending on socioeconomic factors. Over 40% of people living in households earning $75,000+ a year wear fitness trackers and/or smartwatches regularly compared to 10% for those whose annual household income falls below $25,000 per year.

There are more modest differences by gender, race, and ethnicity. More females than males say they regularly use these devices (27% vs. 25%). Asian American adults are more likely to report wearing a fitness tracker on their wrist- 41%. Hispanic and black Americans fall at 31% and 26%, respectively. 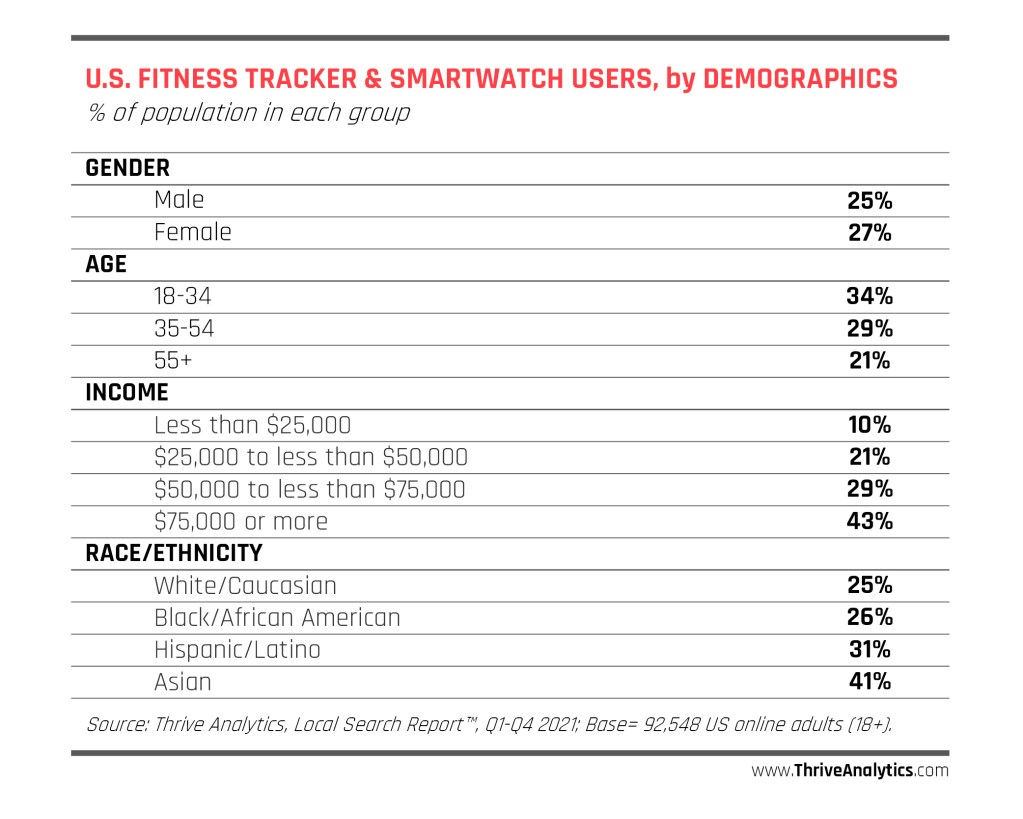 How are adults using them?

A fitness tracker or smartwatch has a wide range of data at its disposal and can compile and measure these things, such as steps taken and miles traveled. Nine out of ten adults (91%) use the device to track daily exercise activity like this. Forty percent also monitor sleep activity each night through the devices, while 15% use them to keep an eye on vital signs like blood pressure to stay healthy.

Typically, the wearer will monitor the data through an app, where they may need to input additional information about themselves and their lifestyle. Some apps require a subscription for services, and 23% of adults stated they use a paid subscription.

When asked about being satisfied with their health, 62% reported they are satisfied or very satisfied.

Manufacturers amass a wealth of data on their users that could be used in many ways. Current privacy policies for some fitness tracking apps allow users’ data to be shared with others. This has raised some concerns over who can and should have access to this health data. When asked about privacy concerns, 45% of adults stated they have little concern over the shared data.