TikTok Ad Revenues to Exceed Meta and YouTube by 2027

New research from Omdia projects that TikTok’s popularity among short-form video apps is poised to propel the company’s ad revenue over the next few years, exceeding that of Meta and YouTube’s video ad revenues combined by 2027.

According to the firm, TikTok’s ad revenue is expected to climb from $13 billion in 2022 to $44 billion by 2027, while TikTok Douyin (the app in China) will soar from $28 billion this year to $76 billion in 2027. Together that means TikTok will account for 37%, or around $120 billion, of the total $331 billion estimated to be generated in online video advertising in 2027. It’s significantly greater than YouTube and Meta, which are expected to make up 24%, or roughly $77 billion, of total online video ad revenue at that time. 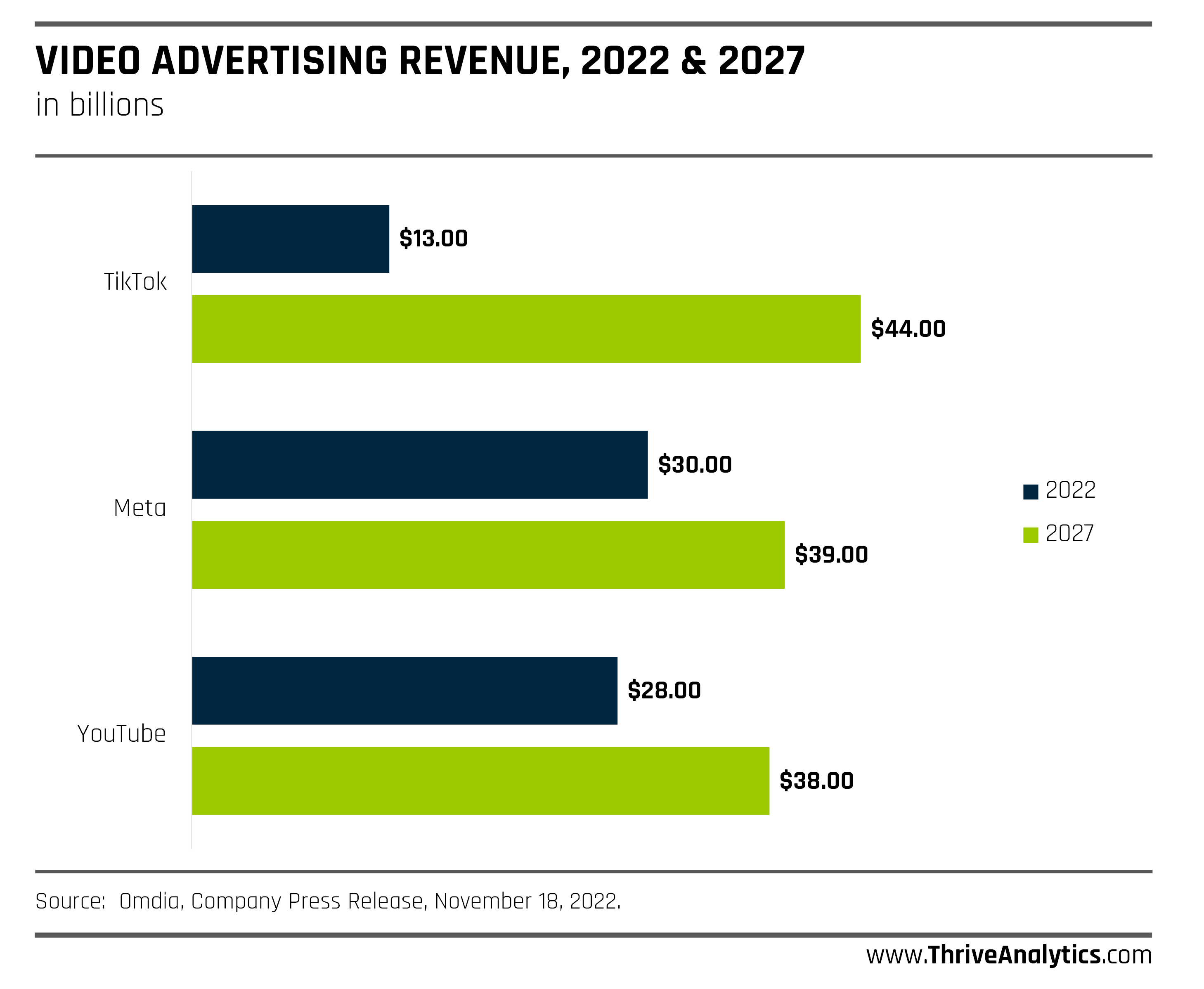 TikTok’s projected advertising revenue share in 2027 marks an increase from 22% of the total $189 billion online video advertising revenue it accounts for in 2022. And while YouTube’s video ad revenue is projected to increase from $28 billion in 2022 to $38 billion by the forecast period, and Meta’s from $30 billion to $39 billion by 2027, their current respective revenue shares of 15% and 16% in 2022 will shrink to 12% each.

"Advertisers are beginning to move away from META and YouTube and towards TikTok to reach their vast follower base," said Maria Rua Aguete Senior Director in Omdia's Media and Entertainment practice group, in a statement.

Omdia research showed that TikTok last month surpassed Netflix to become the second most popular app in the U.S., only behind YouTube which held on to the number one position for under 35 seconds of viewing.

“In the USA, TikTok has overtaken other social media platforms to become the most popular place to watch videos,” Augete continued. “Our trackers for social media viewing time show that consumers spent more than half an hour on TikTok in 2022.”

One of the draws for advertisers on TikTok, according to Omdia, is its popularity among the young consumer market, which has historically been hard to reach through mediums like traditional linear TV. It also expects the platform to try to replicate its success in China with eCommerce integrations and anticipates those efforts to continue in other regions across APAC through partnerships with regional eCommerce companies.

"TikTok's journey has been very interesting, and it's clear that their model works,” Aguete stated. “This platform offers a huge audience reach and potential to advertisers which cannot be ignored."